Hepatocellular carcinoma (HCC) is a common form of cancer and the most common form of liver cancer. Multiple etiologic factors leading to HCC include hepatitis B and C, diabetes, alcoholic fatty liver disease, and non-alcoholic fatty liver disease. Hepatocellular carcinoma in advanced stages may present with tumor burden and thrombi that may extend into the right atrium (RA). This late form of HCC has a poor prognosis. In this case, we present a 63-year-old man who presented to hospital with acute encephalopathy with bilateral pulmonary embolism and thrombus secondary to HCC extending into RA. Clinical trials for non-surgical interventions are ongoing and are needed to treat patients with tumor burden who may be at risk of bleeding following tumor resection.

Hepatocellular carcinoma (HCC) is one of the most common forms of cancer worldwide, and it is the most common form of liver cancer [1]. There are several etiologies of HCC; however, cirrhosis is the primary risk factor for developing HCC regardless of the initial cause of cirrhosis, which may include causes such as alcoholic cirrhosis, hemochromatosis, Wilson’s disease, and hepatitis B and C [2]. Advanced HCC may rarely result in tumor burden metastasizing to the inferior vena cava (IVC) with concomitant thrombi extending into the right atrium (RA). This extension of thrombi with associated tumor burden is a poor prognosis. Traditional nonsurgical treatment for a right atrial thrombus includes anticoagulation with heparin coupled with long-term warfarin therapy or thrombolytic therapy. Surgical management remains the mainstay of a multimodal treatment plan combining resection of the mass and partial hepatectomy. Recent advances in immunological pharmaceutical development also hold promise for increasing the overall survival time of patients with advanced HCC.

Presentation of the case

A 63-year-old man with a medical history of hypothyroidism, type 2 diabetes mellitus, and recent hemorrhagic stroke one month prior to admission presented to the emergency department with acute encephalopathy. Initial computed tomography (CT) scan of the head was negative for hemorrhage, but incidentally showed bilateral pulmonary embolism (PE) (Figure 1). A thoracic computed tomography (CTA) angiogram was ordered, confirming partial occlusion in the lobar pulmonary arteries, as well as a hypodense lesion in the left lobe of the liver measuring 3.5 × 2.1 cm, which after abdominal CT imaging and an additional liver biopsy, would reveal HCC (Figure 2). 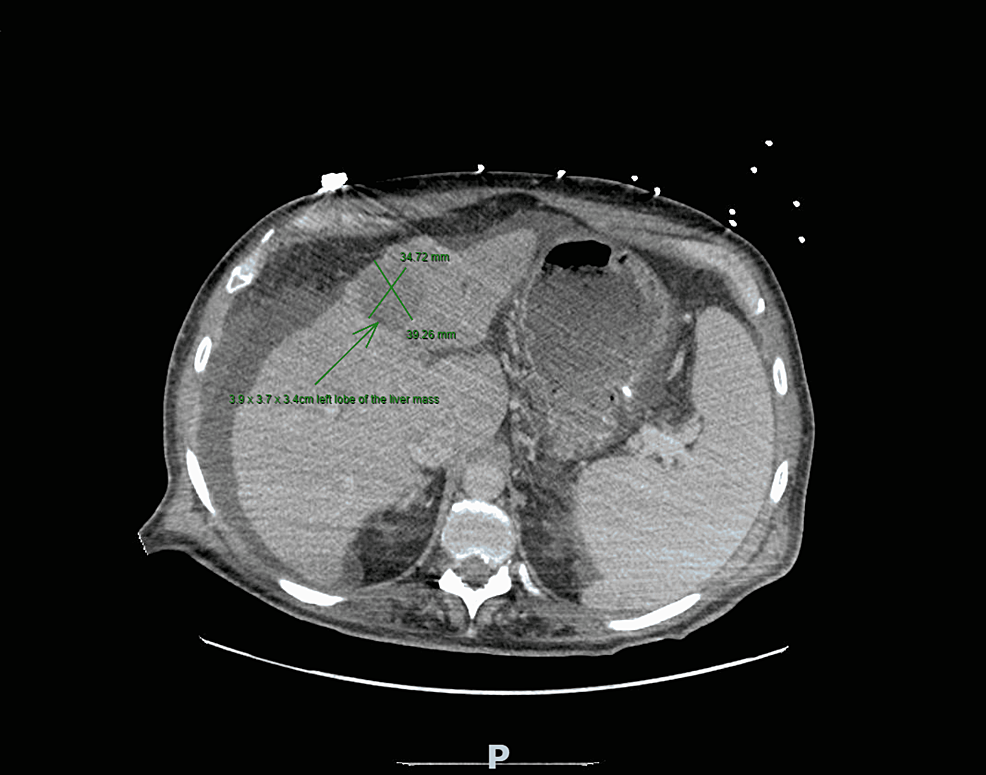 Due to the acute presentation of the encephalopathy, there were fears of brain metastases from a previously unknown tumor. Magnetic resonance imaging (MRI) of the brain revealed diffuse embolic infarcts. Her echocardiogram on a previous admission noted a patent foramen ovale. A transesophageal echocardiogram (TEE) on admission was obtained and showed a large heterogeneous mobile structure in her IVC extending into her RA regarding thrombus versus mass.

Despite recent hemorrhage, the patient was tested on anticoagulation to prevent further stroke or massive PE. Unfortunately, he did not tolerate this due to rebleeding from the 2 × 3 cm right buccal mass which is not amenable to cauterization. This mass was biopsied and corresponded to HCC.

His prognosis with metastatic HCC to the mouth, numerous cardio-embolic strokes, bilateral PE, cirrhosis with child-pugh class B, large CVI and PR thrombus/mass with confusion and debility was estimated. to weeks to months without treatment. After many multidisciplinary meetings and discussions with the family, his care was oriented towards comfort. He was discharged into hospice care and died within two weeks.

Thrombuses are rarely found in a structurally normal heart; however, they may be seen in patients with hypercoagulable state, inflammatory state, or malignant tumors [3]. In HCC, it is rare to see pulmonary emboli associated with large tumor thrombi as the initial manifestation. Advanced HCC usually presents initially with symptoms of jaundice, pruritus, hepatomegaly, splenomegaly, hepatic encephalopathy, or ascites associated with cirrhosis secondary to HCC [4]. Rarer still is that in this patient, there were no symptoms related to his PE, in particular tachycardia, shortness of breath with hypoxia, or hypotension despite a large clotting mass, and his thrombus was discovered incidentally. .

Rarely, patients with HCC may present with a thrombus extending from the IVC to the RA. This is due to the invasion of the hepatic vein and the IVC by the tumor forming a thrombus which traveled through the IVC to the AR. It is a rare condition with a very poor prognosis. A consensus for the management of patients with advanced HCC with tumor thrombus has not been established. Treatment options include pharmacology (anticoagulation), surgical resection to reduce tumor burden, or palliative options including chemotherapy, radiation therapy, or combination therapy regimens [1,3]. In this patient, AngioVac as a minimally invasive approach was considered. AngioVac allows en bloc removal of a large amount of thrombus while avoiding thrombolytics in patients at high risk of bleeding [5]but was not done in this case due to a risk of tumor seeding during the procedure.

The management of advanced HCC is an area of ​​ongoing research. The literature review shows that surgical resection of the thrombus without further surgical resection of the liver confers an average survival time of six months. [6]. Other treatment modalities have advanced in recent years, including trans-arterial chemoembolization (TACE) which visualizes through angiography the blood vessels involved in supplying the tumor with embolization of the vessels to help prevent growth and shrink the tumor. [6]. The risks of TACE include the formation of additional pulmonary embolisms or ischemic liver necrosis. Other treatment modalities include treatment with drugs such as sorafenib, which is a protein kinase inhibitor that improves both time to progression and overall patient survival time. [7]. With the advancement of surgical techniques including hepatectomy and postoperative management, mean survival has improved to 20 months [3]. Some patients will not benefit from management with surgery due to comorbidities that make surgery risky, and these patients will benefit from further research into nonsurgical options for the management of advanced HCC. Further research into surgical and non-surgical management techniques is needed to further increase the time to progression and overall survival time of the disease.

Advanced HCC with thrombus extension in RA is a rare presentation. Several case reports have been published showing that advanced HCC with extension in RA has a poor prognosis for patients even after surgical liver resection with a median survival time of 20 months. Despite this, clear guidelines for management are not readily available. It is important to note that HCC is a highly vascular tumour, especially when metastasized so that anticoagulation or thrombolytics are contraindicated. We believe that it is increasingly important to develop new therapies for less invasive tumor management modalities when patients are found not to be surgical candidates due to their risk of bleeding. Some clinical trials are ongoing and may provide additional guidance.